Monday, 5 Oct 2015 | 11:38 AM ET
Charleston, South Carolina residents are hoping to resume some daily routines after this weekend’s historic flood levels — but it’s not going to be easy.
With some areas of the city receiving nearly 25 inches of rain in the past two days and many neighborhoods still without power or largely isolated due to deep flood waters, a new round of showers is threatening to hit the city — and wind gusts are expected to increase throughout the day.
And if that wasn’t bad enough, it’s nearly impossible to find an open Starbucks in town.
Dubbed a “1,000 year rain event” by meteorologists, the flooding has been blamed for at least seven deaths throughout the state. In Charleston, hundreds of people had to be evacuated from their homes. More than 30,000 people lost power at the height of the storm.
SEE ALSO:

The power is slowly coming back on, though. Earlier this morning, crews from utility company SCE&G managed to restore service to areas of the Shadowmoss subdivision in the city’s West Ashley subdivision, which was hit hard by the storm, receiving more than 23.5 inches of rain.
Downtown Charleston is accessible once again, after officials had blocked entrances to the peninsula for much of Saturday and Sunday due to widespread flooding, but many streets remain closed. Officials are advising residents to stay home if possible, as flash flood warnings in the three-county area remain in effect until 3:30 pm ET Monday. A coastal flooding advisory is in effect from noon until 6 pm ET — with tides expected to approach 8 feet.


The rainfall totals for the area are staggering. Charleston’s airport received 16.78 inches of rain, according to local TV station WCIV. Boone Hall Plantation in the Mt. Pleasant area received 24.23 inches. Kiawah Island saw 18.25 inches and downtown got hit with 14.74 inches.
Meteorologist Ryan Maue, on Twitter, showed calculations that South Carolina saw 4.4 trillion gallons of water fall from the sky during the storm.
While additional rain is expected today, it’s wind that has forecasters worried. The city could see gusts hit 30-40 mph, which may topple trees that are in saturated grounds.
While the situation is still bad in Charleston, it’s significantly better than it was 24-36 hours ago.
Downtown Charleston started flooding Thursday night — with the tourist friendly Market St. area having several inches of water on the ground. But Market Street floods fairly regularly. A sustained thundershower can bring that about.
By mid-morning Saturday, the downtown flooding was dire enough that local police had started shut down interstate exits to the area, along with inbound surface streets. Most local roads in the outlying areas were navigatable, though.
Saturday night, around 8 pm ET, though, torrential rains hit the city and continued through the night. (That’s when power outages became widespread throughout the city.)
By Sunday morning, the flooding was widespread and rescue crews were going house to house in affected areas, evacuating families whose houses had been breached. (At the same time, residents in higher ground areas came out to look at the floodwaters — and in many cases, play in them, despite warnings about the bacteria and threat of snakes and alligators, which are common in the Low Country.)
In the Shadowmoss subdivision, many people were kayaking down the severely flooded golf course — though a few in canoes were aiding in the rescue efforts.
Shauna TerHark and her family weren’t as lucky as some. The flood began to threaten their home Saturday night — and they spend the evening moving their prized possessions upstairs. After water breached their sunroom, and with waters still rising, she, her husband, their son and two dogs were evacuated from their home via boat Sunday morning, eventually relocating to a pet-friendly hotel roughly 8 miles away.
They haven’t been back since — and don’t yet know what they’ll find when they eventually return home.
“We know we’ve got damage; we just don’t know to what extent yet,” says TerHark. “I think we’re going to be in a hotel for a while. We’re going to be looking at, presumably, water extraction and potential mold issues. I would imagine we’ll also need a completely new HVAC system. And I don’t know how high the water got in the garage.” 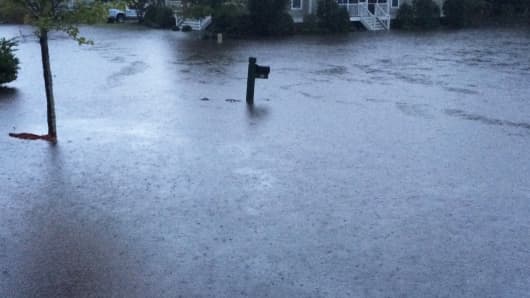 Why is flood insurance so sparse?