President Obama is directing all federal agencies to factor in rising sea levels when building infrastructure projects.
In a climate change push, Obama issued an executive order on Friday establishing a flood standard aimed at reducing risk and cutting costs of future flood disasters brought on by climate change.
“It is the policy of the United States to improve the resilience of communities and Federal assets against the impacts of flooding. These impacts are anticipated to increase over time due to the effects of climate change and other threats,” Obama said in the executive order.
“Losses caused by flooding affect the environment, our economic prosperity, and public health and safety, each of which affects our national security,” the order states.
The new standards give agencies three options on how to prepare for floods and use them in the siting, design and construction of federally funded buildings, roads and infrastructure.
The three choices: Use data and methods provided by the “best-available, actionable climate science,” build 2 feet above the 100-year flood elevation mark for standard projects and 3 feet for “critical” buildings like hospitals and evacuation centers, or build to the 500-year flood elevation.
“By requiring that Federally funded buildings, roads and other infrastructure are constructed to better withstand the impacts of flooding, the President’s action will support the thousands of communities that have strengthened their local floodplain management codes and standards, and will help ensure Federal projects last as long as intended,” the White House Council on Environmental Quality said in a fact sheet.
According to the National Climate Assessment issued by the White House last year, over $1 trillion of property and structures in the U.S. are at risk of sea level rise.
Over 50 percent of Americans live in coastal counties susceptible to storm surges, rising sea levels and flooding, the White House said.
The order comes days after the U.S. Army Corps of Engineers released a post-Hurricane Sandy report on the flood risk posed to 31,200 miles of the north Atlantic coast.
In the report, the Army Corps specifically cited sea level rise cause by climate change as a factor that “flood risk is increasing for coastal populations and supporting infrastructure.”
In its fact sheet, the Council on Environmental Quality also noted data from the National Oceanic and Atmospheric Administration that put 2014 as the hottest year on record.
Contact Flood Flaps today at 843-881-0190 or [email protected] to find out how our flood vents can help reduce your flood insurance, and protect your home or business property from flood damage. 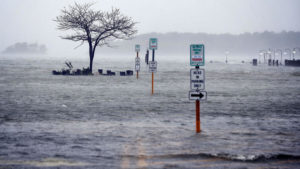 Questioning the Standards for Reducing the Risk of Floods