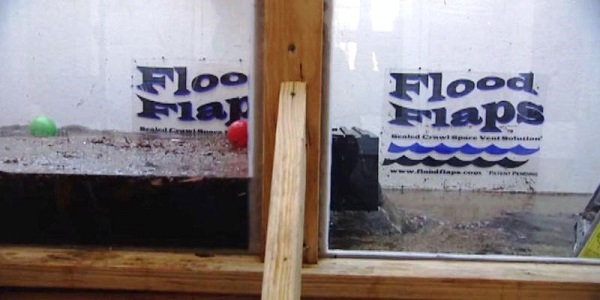 This is a video of the blower door testing proving how air tight Flood Flaps are versus the competition.
Several tests were completed with smoke to visually demonstrate the leakage of the flood vents.

Several tests were completed with smoke to visually demonstrate the leakage of the flood vents. The first smoke test was completed with a Wizard Stick smoke pen that allowed for a direct stream of smoke to be aimed at the vents. For the Flood Flaps vent, this smoke wafted around in the left (unsealed) chamber and did not have any direct stream that seemed to be pulled into the depressurized right side chamber. For the Competitor‟s vent, the same is not true. The Competitor‟s vent had numerous leakage pathways connecting the left unsealed chamber to the simulated „sealed crawlspace‟ of the right chamber. No smoke wafted during the testing of the Competitor‟s vent and at 6″+ away from the face of the vent, the depressurized chamber continued to draw the smoke stream directly into it from the breaches in the seal. This was markedly different than the Flood Flaps and proved to be an average of 7 times leakier at varying pressures.
The second test that was completed on both systems was where the left chamber in the tank was filled with smoke from a theatrical fog machine while the right side was depressurized again. The results from this test proved to be similar to the first smoke test. The Flood Flaps vent allowed for very small amounts of smoke to seep, or be pulled into the right chamber, while the Competitor‟s vent quickly allowed for the right side of the chamber to fill with smoke from the theatrical fog machine.
The tests demonstrated a superior air seal from the Flood Flaps vent while the Competitor‟s vent allowed for significantly more air leakage and bypasses between chambers and proved to not be air tight. This was demonstrated from the pressure readings taken from the manometer and from the 2 visual smoke tests completed while the depressurization of the right chamber was in effect. 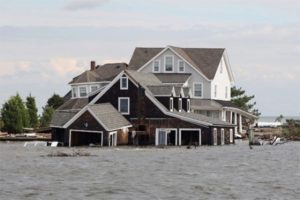 Where Can I Purchase Flood Flaps, Flood Vents?