Check out this article Flood Flaps is mentioned in from JLC The Journal of Light Construction by Ted Cushman
Traditionally, crawl spaces have been equipped with vents to allow fresh air exchange between the underfloor space and the outdoors, and floor systems were insulated with fiberglass batt insulation in the joist cavities. But in hot, humid, and mixed climate zones, the building science justification for that approach has never been solid, and these days, the state of the art solution is a sealed, conditioned crawlspace, with a vapor barrier protecting the underfloor space from ground moisture, and with the insulated thermal boundary moved from the framed floor to the wall perimeter. Codes have evolved in recent years to allow this approach, and the latest codes include prescriptive details for the ground vapor barrier, wall insulation, and conditioning system.
In the hot, muggy climate of South Carolina, a conditioned crawl space is particularly advantageous. Even in dry Northern climates, ventilation is only marginally effective at removing ground moisture from an under-floor crawl space; in the humid South, crawl space ventilation openings that connect to the outdoor air often make things worse. So insulating and sealing the crawl space has become standard practice in the low-country market near Charleston, South Carolina, and Savannah, Georgia.
With offices in Hilton Head and Charleston, S.C.,specialty contractor Energy One has created thousands of sealed crawl spaces over the past ten years, in both new and existing homes. We followed along as the crew installed and sealed the ground-cover vapor barrier under a new house, then applied poly-faced rolls of fiberglass insulation to the perimeter walls.
This house is located in the AE flood zone along the Wando River in the Charleston neighborhood of Daniel Island. So the crawl space is required to have flood vents to relieve the pressure of high water in case of a flood — which complicates the air-sealing problem. In this case, Energy One was only contracted to install the ground cover and wall insulation; the builder’s crew installed “Sealed Series” Flood Flaps.
However, Energy One planned to return as soon as the doors and vents were in place and a dehumidifier was installed. That’s because in the damp South Carolina climate, mildew had already started to grow on the surface of the building’s floor framing. As soon as the humidity in the space is controllable, Energy One will be back to scrub the floor framing with a sanitizing cleanser. Energy One also sells a long-term mold-inhibiting surface treatment, but in this case, the builder has opted for cleaning only. Once the crawl space is sealed against vapor and air intrusion, mildew probably won’t return unless the dehumidifier fails. To keep tabs on that risk, Energy One will install a humidity sensor alarm in the space. 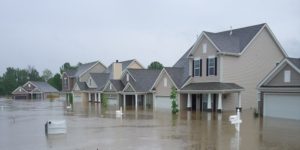 Flood Openings in Basement Walls Can Save on Insurance Costs